PHOTOS FROM THE PAST

It has been a while since we've posted anything so we are anxious to get back into business. The theme is baseball, a popular pastime in Fort Lee and still going strong - though a tad more organized these days. 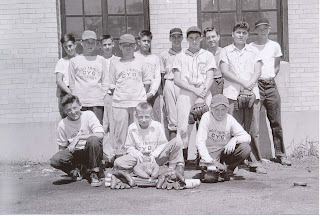 We have some photos from the 1950s and before. The first one is probably late 1950s and looks like it was taken at the Fort Lee Municipal building. The boys look to be about 14 or 15 years old. Not much in the way of uniforms. They played for the CYO of Holy Trinity School. We're looking for names of some of these young men. Recognize anyone?

The second photo was sent to us by retired FLPD Detective Joseph Gallo. It's a photo of his Dad on Hudson Street. He looks like he could play some ball. Detective Gallo also sent a later photo of his father in navy uniform on Hudson Terrace. 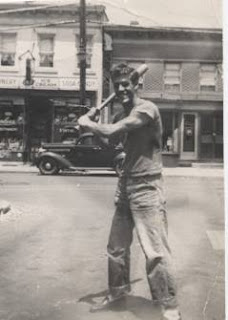 He looks like he means business in both photos. The photos also provide a glimpse of Fort Lee 65-70 years ago.
Thank you Detective Gallo.

You can read about Gallo and others who served in World War II in the Palisadian newspaper, available at the Fort Lee Public Library on microfilm. There is an index to the names of the servicemen and women mentioned in the 1943 newspaper. Some articles feature photos. We would be happy to check the index for a name. 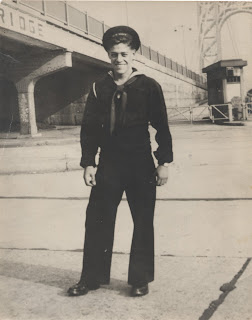 Joe Gallo, Sr. above and at right. He was selected for the navy in Sept. of 1943 according to the Palisadian newspaper. In November of 1943 Seamen 2nd class Gallo was home on an 8 day leave.

Follow-up
In a previous blog we featured a photo of some children registering their bikes at the Municipal building. We wanted to know who they were. Some have been identified. Joy Peterman tells us that the boy in front on the left is Michael Allen and the boy in the middle with the striped shirt is Mark Goldhammer. Maybe Michael or Mark can identify some of the others.

This issue featured a lot of guys. We will try to be more diverse next time. Maybe the next issue will not take a year!

Welcome to Fort Lee History Archive - Blog II
We promised a few more Main Street photos in the last blog, so here they are.
In the late 1920s and early 1930s Main Street near Lemoine Avenue underwent a transformation. The construction of the George Washington Bridge meant the Borough had to accommodate an increase in traffic. Because their routes were flexible buses put the trolleys out of business and the new bridge helped kill ferry service. Real estate sales along Main Street boomed. A photo from that era illustrates some of the chaos. 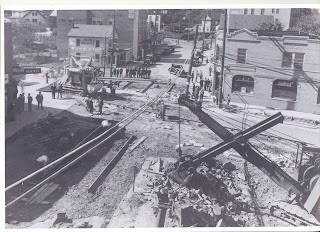 Fort Lee’s new Municipal building was dedicated in 1929. An early 1930s post card shows a view of the uncluttered lawn and façade. Note the large home to the left of the building now the site of Fort Lee's Senior Center. 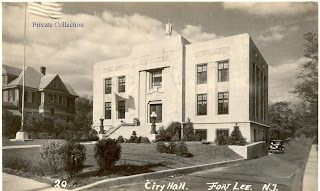 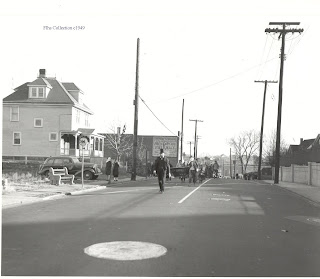 This is a view of Main Street at Jones Road circa 1949. A Ragamuffin parade (organized by the Police Department) is coming into view. 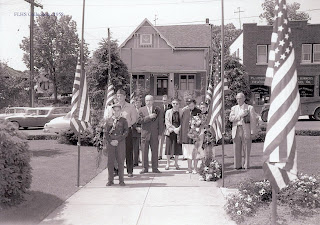 In the 1950s a photographer captured a representative group of citizens during a Memorial Day Ceremony. The view is from the steps of the municipal building toward the street. We would like to identify the people who are in the photo. The photo is dated May 30, 1958. The building across the street will be the subject of a later blog. When this photo was taken it was the home of the local Masons (Wakefield Lodge). The photo was taken by Ptl. Forenza.

While we are on the subject of the Municipal building we have a photo from early 1960s showing children registering their bikes. 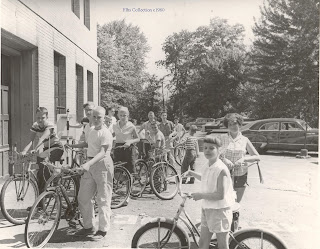 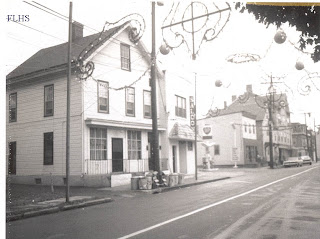 The previous blog featured some photos of saloons along Main Street. We have one more to show. The Yellow Front Saloon in 1967.
A recent article in the Fort Lee Suburbanite mentioned the wonderful contributions to the Fort Lee Historical Society made by our President Robert Boylan. He not only collected material but also had the foresight to take photos of Fort Lee as it was in the 1950s and 1960s. The Yellow Front Saloon photo is one of his.


In an upcoming blog we will show some material about our schools: old photos of school children and teachers; early photos of the schools; and some of the ephemera we have collected over the years. One of the great treasures we have in the Historical Society’s collection is the School Board minute book starting in 1851 outlining the activities of the Board while Fort Lee was still part of Hackensack Township. 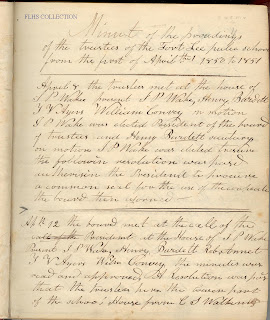 We scanned some sample pages from the book featuring the names of early (male) voters who elected the School Board back then. 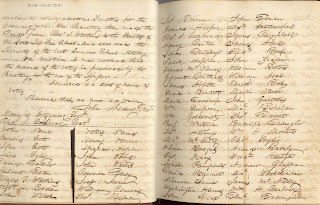 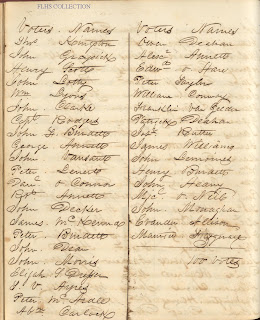 There is a project underway to index all the names mentioned in the book. The School itself was probably located on lower Main Street near the border with Edgewater.


From a private collector of post cards we have a wonderful view of the First National Bank with the George Washington Bridge in the background. Yes there are still some great items to be found on Ebay. 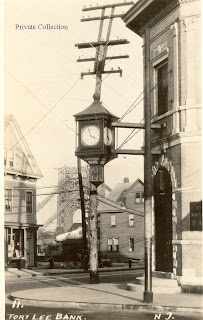 The Fort Lee Historical Society’s Archive has been housed at the Judge Moore House Museum since 1999. Before the Museum became available the Historical Society’s collection was housed in Fort Lee’s Municipal building and then put in storage when that building was being renovated.
The Archive was collected by our President, Robert T. Boylan over several decades. The collection has been enhanced by donations. It is impossible to provide unlimited access to the Historical Society’s archives. It is our hope that this blog will enable many more of you interested in local history to view parts of the collection and we hope it will enhance understanding of Fort Lee’s rich heritage. We will be providing a look at Fort Lee from the sublime to the trivial. The blog will also provide a look at material that is in private hands. There are many collectors out there and we are hoping they will be willing to scan and photograph items for this blog or allow us to do the work. If you would like to contribute material to the Historical Society or lend for the blog you can reach the archivist at flhsarchivist@gmail.com.
Our first topic will be Main Street, part of which has been around since the Revolutionary War.
Main Street
Only part of what is now Main Street in Fort Lee coincides with Washington's retreat route through Fort Lee. Originally the road through Fort Lee “came up the hill at an angle and must have been very steep in certain parts. It passed over the hill very close to the northern bastion of the fort. Many traces of it remain; many people can remember the closing up of the last section. Old buildings are standing which were evidently built beside it…It intersected the present Main avenue just east of Palisade Avenue coinciding with it as far as Schlosser’s hotel where it bent southward and ran over the hill down to Leonia road to English Neighborhood. Ex-president Christie writes me ‘the road from Fort Lee to the English Neighborhood (Leonia) has been changed since the Revolution by a bend to the North. This change I think was made at the time of the construction of the Hackensack and Fort Lee turnpike. Mr. J.F. Burdett of Fort Lee tells me that it intersected the present road at Schlosser’s Hotel.’”
(From The Retreat of ’76 across Bergen County: an abstract of a paper read before the Society on Nov. 20, 1905, by T.N. Glover. Papers and proceedings of the Bergen County Historical Society, 1905-1906, Number two.) 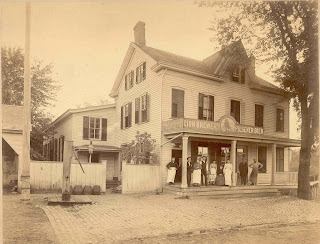 The Hackensack-Fort Lee Turnpike was authorized by the New Jersey Legislature during the 1820s. The earliest map the Historical Society has is an 1849 reproduction showing New York City and vicinity. By that time the configuration of Main Street appears to have been established. Beginning in the early 1900s trolleys began to run along Main Street from Palisade Avenue to Leonia. Another trolley came from Abbott Boulevard and went to Coytesville crossing Main Street near the current post office. The trolleys ran for 30 or more years until more versatile buses took over.
Main Street has seen many changes in the past 50 years. Taverns and small mom and pop businesses once lined the street where banks now seem to predominate. Main Street has also lost some interesting sites (architecturally and historically). The Academy of the Holy Angels has been replaced by Mediterranean Towers: the Fisher home by Madonna Church and school; Schlosser’s Hotel by the Gilvan building (Main and Schlosser). One of the oldest buildings on Main Street and still in use though much renovated is the Methodist Church. The most architecturally significant structure on Main Street now is Fort Lee’s Municipal building. Though much renovated and expanded the façade still reflects the Art Deco Style of the 1920s.

Dr. Henry J. Anderson's house which stood on the Academy of the Holy Angels property during the school's early years is seen below. 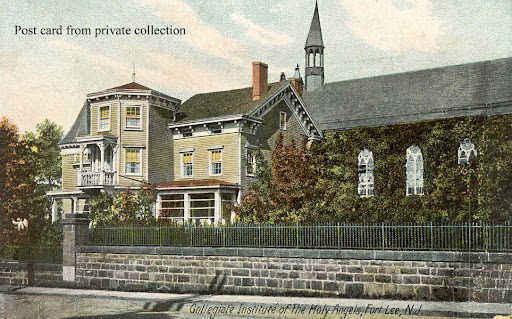 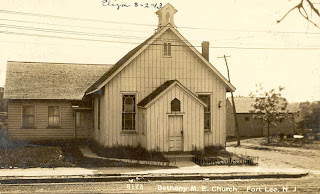 Above on the right is an old post card view of Bethany Methodist Church one of the oldest structures on Main Street. The building has been extensively renovated.


Some other buildings of interest along Main Street some of which no longer exist: 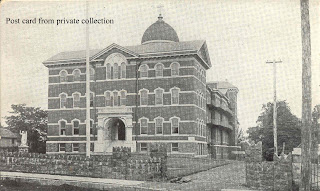 The School building of the Academy of the Holy Angels built in 1908 and torn down in the 1960s. 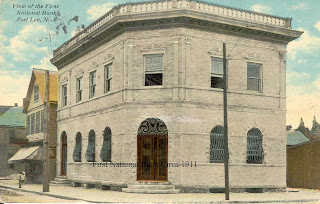 The First National Bank, located at Main Street and Palisade Avenue has been extensively changed but it still stands. 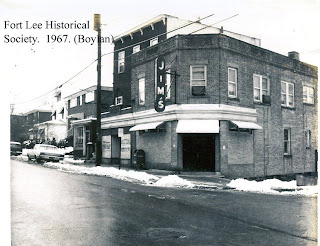 483 Main Street, the building that housed Jim's tavern was torn down. This photo from 1967 is part of a collection of Street photos taken by the President of the Historical Society, Robert T. Boylan, over 30 years ago.

And speaking of taverns here are a few more that were on Main Street in the 1960s. Willie's Tavern was located at 212 Main Street; Fireside Tavern at 217 Main Street; and Bill Cella's Inn, 456 Main. 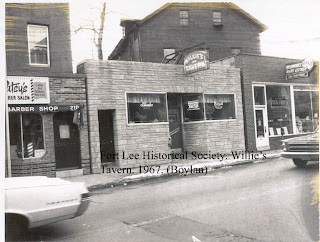 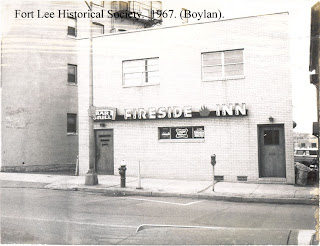 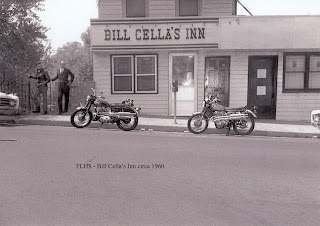 Our next blog will feature some ragamuffins, some more views of Main Street and maybe even some contributions from our audience. Please send comments and questions to: flhsarchivist@gmail.com.

Posted by Archivist at 2:15 PM